Influences on the Artists: Why?

The rise of a school of landscape painters in the Hudson Valley region was primarily due to a rare and spectacular cultural moment in American History, in which the physical landscape and society’s philosophical understanding of that landscape, were relatively unexplored. Works from this school are inextricably part of the cultural fabric, in that they are themselves artistic expressions with associations from and references to past great works—of literature and art, and as such, are part of the period’s ever-developing relationship with the environment. Almost all American and immigrant artists associated with this school were trained, at some point, to master the classical Renaissance-era landscape style along with the artistic developments associated with this genre of painting since then. A traditional landscape painting at the beginning of the nineteenth century in America and in Europe generally falls into one of two descriptive categories: the beautiful or the sublime.

The beautiful, or the familiar style with its harmonious, pastoral compositions depicting a tamed type of nature, is best attributed to the French painter Claude Lorrain. Eighteenth century philosopher Immanuel Kant believed beauty to be a characteristic that is capable of arousing positive feelings and more importantly, something worth considering intellectually. Claude’s paintings are well-designed examples of that beauty; each piece displays, more or less, a perfect balance between a human presence and the surrounding civilized land. According to Art Historian Barbara Novack’s famous book, Nature and Culture, “The pastoral aspect of the Claude convention reinforced those myths of America as a new Eden that were so important in the nineteenth century.” The familiarity of the cultivated landscape, gentle lines, warm colors and associated European romanticism was a comforting lens through which to view the American landscape, for the painters and the public. 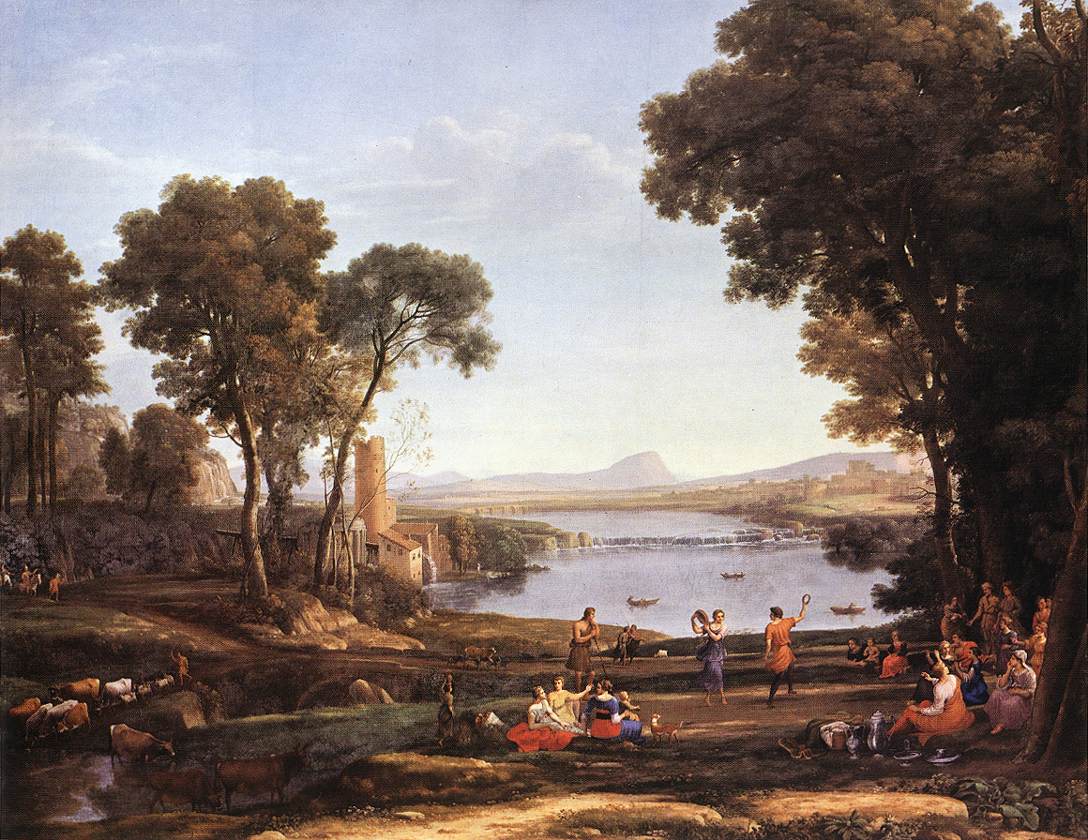 In Claude’s Landscape with a Mill, for example, the people playing in the foreground are more or less perfectly framed by the trees, while the body of water in the middle ground gently leads the viewer’s eye from the pleasant scene towards the background to be lost into an almost out-of-sight mountain range, before being drawn back around to the foreground. What Claude arguably accomplishes, along with many others after him, is to create a piece of art that is perfectly balanced, aesthetically pleasing according to all modern conventions; a piece that a viewer engages with in exclusively pleasurable manner, almost meditatively so. A piece that, at its essence, according to philosopher Edmond Burke, is emotionally pleasing for the viewer in a way that differs from the feelings associated from the sublime on a fundamental level.

On the other hand, the sublime, according to Burke, is a characteristic associated with nature that has the capacity to evoke intense, awe-inspiring emotions. He argues that one’s emotional response to the sublime is distinct from that of the beautiful because “the passion caused by the great and sublime in nature is astonishment, and astonishment is that state of the soul in which all its motions are suspended, with some degree of horror.” Therefore, what is sublime is the jagged, wild, deep, dark and open-vastness associated with an un-civilized nature. A more directly related understanding of the sublime, as defined by Samuel Monk, identifies the sublime as something in opposition to the symmetry and proportionality associated with neo-classicism. This notion is supported by Kant’s theory, which associates the sublime with the emotional power reflected by magnificent natural energies. The artist best known for portraying the sublime in his works is Italian Baroque painter, Salvator Rosa, who painted terrifying aspects of nature that evoke a powerful, heavy and enjoyable human emotion. 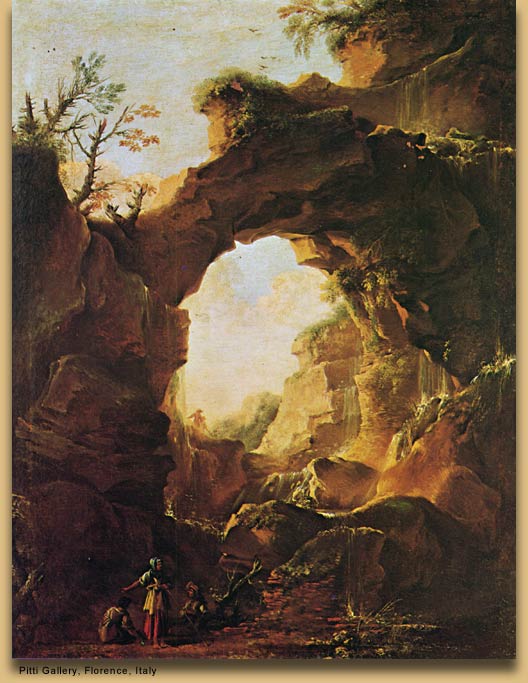 The 17th century painter, Salvator Rosa, portrayed unconventional subjects in colorful and rugged scenes that impart some shock upon the viewer. The artist disregarded modern conventions of aesthetic; his work was something notably different from those of many other landscapes painters because Rosa’s works, in part, humble the viewer. Rosa’s works display a nature that is more powerful than the collective effort of human society, a nature that challenges the authority and capability of human society by interfering and interrupting Manifest Destiny. Rosa’s Grotto with Cascades, pictured above, evokes such an awareness of the grandeur of nature and will serve as an example of the sublime. The jagged cliffs, natural bridge, cascading water, engulfing rocks, distant birds, hardly discernable figures in the background and three relatively plain figures in the foreground of the painting confront the viewer with the impressive landscape. Rosa’s light contrast separates the foreground from the background quite dramatically, yet his use of light in the “opening” between the two spaces in the hole underneath the natural bridge, creates a hazy atmosphere and is somewhat disorientating for the viewer. In Rosa’s work and more generally, the sublime, therefore, evokes an acknowledgement of something in nature that is more powerful and / or greater than oneself.

Neither Claude nor Rosa define these two categories entirely, but they are now as they were then, magnificent examples of each influential style. One of the most influential pieces of literature on the artists from the school was Robert Knight’s early nineteenth century piece, An Analytical Inquiry into the Principles of Taste, which argues that beauty is not just a kind of human sensory perception, beauty involves a function of the mind, a calculation based on past experiences, preferences, etc. “Beauty is no quality in things themselves: it exists merely in the mind, which contemplates them, and each mind perceives a different beauty.” Artists now had a license to explore all forms of beauty because accepted artistic conventions were somewhat explained as contextual popularities rather than universal preferences. Pieces of literature such as Washington Irving’s “The Legend of Sleepy Hollow” and James Fienmore Cooper’s “The Pinoneers” and “The Last of the Mohicans” in the mid 1820s inspired a domestic interest in seeing and understanding America’s unexplored territories. Emerson’s “Nature” and Thoreau’s “Walden,” in 1836 and 1854 respectively, not only inspired citizens to explore their relationship with nature but these contributed to the general discussion on the value of nature, which inspired artists and others to deeply consider its value.

Click here for the corresponding virtual tour with more information!